What started as an illegal dumping ground is now an urban wildlife sanctuary & community gathering place, Please join Manhattan Wetlands & Wildlife, Conservancy North and your neighbors to help cleanup and restore the North Cove Tidal Wetlands in Inwood, NYC.  Enjoy a talk on biodiversity and the estuary with EPA award winner James “Birdman” Cataldi, and hear from other experts in related fields. And much more….
Music / educational activities for youth starts around noon.

There will be lunch for all those who pitch in. Please arrive a little early.  Sturdy shoes or boots and long sleeves recommended.   Roll up your sleeves and make a difference in our community!
Saturday, September 27th, 10am-3pm 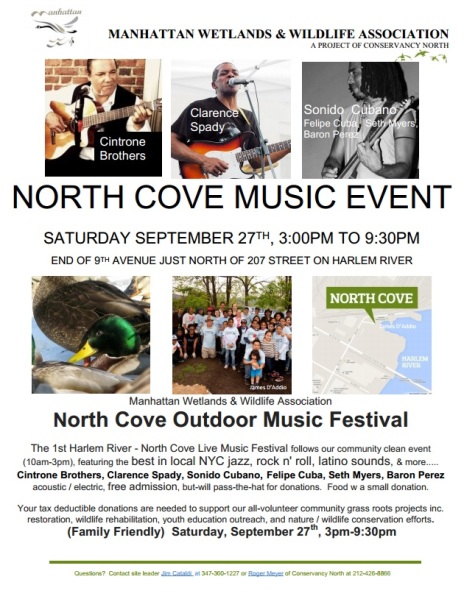 the special emissary for Chief Louis Chinalquay and the people of Buffalo River Dene Nation located in northwest Saskatchewan, Canada.

Mr. Adelard Blackman, Chairman of the BRDN NGO and Special Emissary of the Buffalo River Dene Nation, frequently attends and participates in meetings held by the various UN bodies to raise awareness and support for issues concerning the BRDN.

Our long struggle has always been about the very survival of our land and our people”, said Buffalo River Dene Nation (BRDN) spokesman Adelard Blackman. “Unabated resource development is killing the land, our water, and our people. Hope to see you there. Birdman

The state’s plan to wipe out the entire population of mute swans by 2025 has bird advocates worried about graceful fowls that flock to Prospect Park.

Next time you go to your favorite park to see those large, white birds of regal repose, better bring a camera. You may never see them again. New York State’s mute swan may become the first animal to be managed into extinction by 2025. This proposed, premeditated extirpation is the endgame of the New York State Department of Environmental Conservation’s (DEC) newly released draft “Management Plan for Mute Swans in New York State,” calling for the elimination of all free-ranging mute swans. The plan is fallacious and insidious, another misuse of taxpayer monies to promote killing and molestation as a wildlife management science. The DEC states that their population of 2,200 has actually stabilized.

Seized from its native lands, the mute swan has become our neighbor for the past 130 years since being shanghaied to this country because of its timeless beauty. It has been a fixture in the imagination of man since early civilization, but also has been persecuted for almost as long.

The DEC’s justification for its scheduled disappearance — using deceptive language and misconceptions — is almost identical to the reasons given for the slaughter of over 5,000 resident Canada geese (a native, North American bird) in New York City: a potential aviation hazard (birdstrikes); aggression while nesting (ironically, the mute swan’s main target is Canada geese); and loss of water quality from coliform bacteria. Here, the DEC, along with its cooperator, the USDA-Wildlife Services, is killing two birds with one stone.

STEWARDSHIP GOAL: KEEP FLOCKS, HUMANS & MIGRATION PATHS HEALTHY(We are all part of web of life, not separate from it, what we to web we do to ourselves)

MANHATTAN IS A MIGRATION WINTER HOME FOR MANY BIRDS INC. WATER FOWL

Manhattan is a wintering home for many birds on the east cost migration path and has been for thousands of years, perhaps 100s of thousands or more. The trend is that we are destroying so many places like North Cove along this east coast migration path, that birds (and multigenerational insects like the monarch) can’t get from one place (to rest and heal and eat) to the next. Especially final locations for the season, like summer or winter, for species like the waterfowl who rely on the Manhattan area in the winter and has from what we can tell since before recorded history. With out healthy migration landing points like north cove dedicated to migratory wildlife especially in dense urban environments the east coast migration is under a realistic non recoverable threat of complete collapse.

MWAWA is now responsible for protecting, and providing stewardship for the North Cove Wetlands migration point, under the leadership of James Cataldi, licensed wildlife Rehabilator and 2012 US EPA Environmental Quality Award Winner; highest honor for enhancing and protecting public health and the environment.

North cove serves this critical function as a “health hub” Not only as a restored wetland estuary cove, into it’s fifth year but also where migratory and native wildlife / feral are captured and released for medical purposes, cared for and protected. The medical component of MWAWA stewardship is central to our value proposition; and provides health benefits far beyond the area…up and down the east coast. We as well have plans and a expert partner to help us to re introduce marsh vegetation into the mud flat making it a five zone or level salt water marsh.

In a decade or so when a five zone marsh will be fully established by our current estimates, all at no tax payer expense, North Cove Stewardship will be fully beneficial to the entire region. We ask you to join us in our mission, starting today with a donation or paid membership or volunteering at any level you wish and can afford. We can also receive items we can sell to purchase critical wildlife conservancy items gladly.

It is our vision that the Inwood North Cove Wetlands will be a lush self sustainable natural habitat eco system with the capacity to support multiple species through out the year. And monitoring / medical catch point. As well providing a scientific and enjoyment opportunities for all New Yorkers and tourists from around the world. And providing naturally diverse nourishment in the winter months, in the water and on land. Until then we ask for your support, especially now. North Cove offers great access to the Harlem River and an ideal setting for community out reach programs; and environmental justice internship as well as community service programs. An ideal location to teach people about natural habitat conservation, community service, and how modern plant growing techniques can create small business drivers and career opportunities here in Inwood, and help save and return natural habitats, like Inwood North Cove.

At the core of our behind the scenes work we have been developing, measuring and refining techniques which look to be becoming increasingly more effective in promoting spring migration north. This work and scientific research directly aids in reducing the numbers of geese year round in a sustainable manor. And not using critical city tax dollars as do the non sustainable killing programs carried out in the area parks in the summer by gassing them to death, including babies. Better to give the geese healthy winter homes, and build the birds up strong to make the migrations north then to kill them, and having year round residents of our parks and ball fields. And all the other benefits of places like the North Cove Wildlife Refuge/ sanctuary. 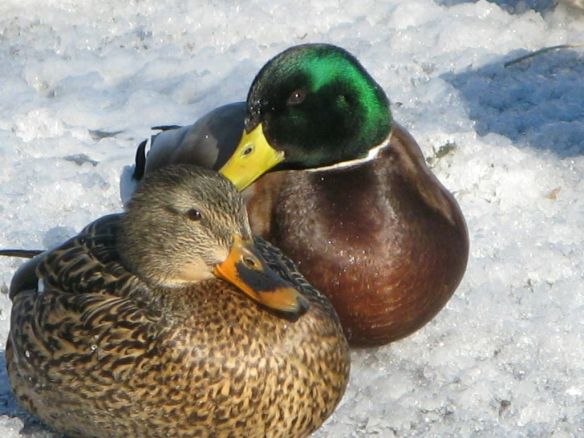 MORE FOOD ON THE GROUND IS NEEDED

This year North Cove needs more food on the ground to keep the immune systems healthy for all the wildlife using the North Cove for their winter home. THE BIRDS MOVE BETWEEN NORTH COVE AND THE AREA PARKS SO WE ARE SERVING THE ENTIRE AREA NOT JUST NORTH COVE.

As the unexpectedly cold winter start and several early snow falls followed by freezing spells killed almost all of the grazing area, at north cove, which was expected to continue to feed the flocks into February, as we planted winter rye in late October. We hoped for at least 45 to 60 days of grazing area this year. So we had to start our supplemental food program earlier than we planned. And working on new methods to keep more grazing pastures starting next year. However we need more funds critically today and next month and are reaching out yo the public to support our mission. 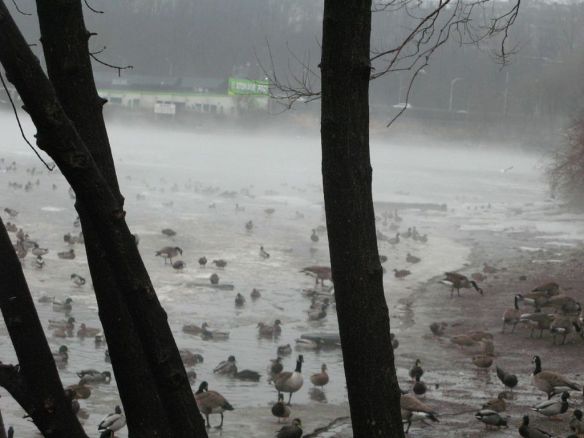 We believe that the unusually high number of loose dogs off leash have made the populations higher at north cove this year.

WINTER HOME NEEDS TO HAVE ENOUGH FOOD TO KEEP IMMUNE SYSTEMS HEALTH / AND READY FOR SPRING MIGRATION NORTH.. ONLY 60 more days to get ready for trip north as of January 20th 2014.

While most of the waterfowl will start to migrate north in 60 or so days, we are working hard to keep the flocks immune systems healthy with oils, vitamins, minerals and just enough fuel to keep them warm and strong for the migration north in the spring. WE DON’T WANT SICK OR WEAKENED BIRDS MIGRATING TO OTHER PLACES ONLY HEALTHY STRONG ONES. In the spring the birds to the south like heron and egret will take the place of the large flocks of water fowl if past years are any indication of the future. 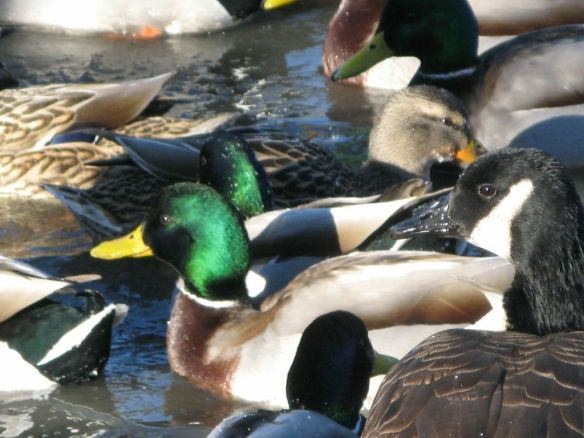 The waterfowl (geese and ducks) are hearty species, however many have traveled long distances and are stressed, hungry and weakened from the long flight some thousands of miles. They are programmed to migrate south just below the ice line in the winter months, for thousands of years. Maybe tens of thousands. In recent years, the winters are getting more intense over the past years. Even record breaking, despite the general belief of climate warming. Looks more like significant climate change.

Significant climate change requires the migrating wildlife to have bountiful landing areas or places to provide for them. A place to stop rest, eat, recover from long migrations and prepare for the next, build strong social bonds so the flocks are large enough to travel together to reduce the amount of energy to move through the air for many hours, which new proof has proven flying in v formations does just was scientifically confirmed. 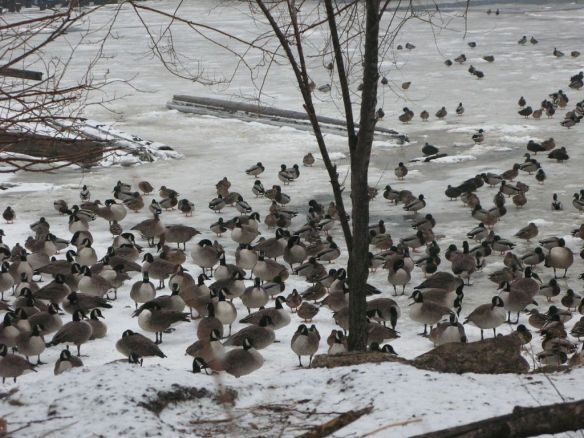 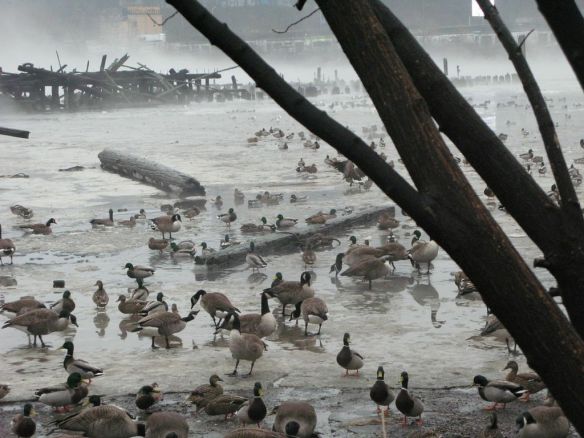 Please donate at what ever level you can afford, no donation will be too small, even $3, at the following:

Thank you Birdman of Inwood and the North Cove